The Government’s announcement that Wellington would move to Alert Level 2 came just six hours before the Dominion Post Sport and Recreation Awards 2021 were set to kick off.

With more than 900 people expected to be gathering at TSB Arena, event organisers Nuku Ora were faced with the tough reality of cancelling the Awards Dinner Gala.

“It was gutting to not be able to go ahead with the event as planned. The venue was completely set up, the food was in the oven already, and dress rehearsals were underway.” said Phil Gibbons, CEO of Nuku Ora. “However, delivering a safe event is always our number one priority, so when the government announcement was made, it was ultimately an easy, albeit disappointing, decision to make.”

With so much of the night already set, event organiser’s Nuku Ora pivoted, choosing instead to host the awards virtually; livestreaming a condensed version of the ceremony that was hosted by emcees Jason Pine and Paula Tesoriero and included entertainment, a Keynote Address from John Allen, and of course recognition of the finalists and winners front and center.

“We are of course disheartened that everyone couldn’t experience the event in-person,” Gibbons said. “But ultimately, these awards are about celebrating and acknowledging our finalists, winners, and the impact they have made on their communities around our region. By delivering the awards online we were able to do that, and I’m incredibly proud of our team, and grateful to our partners and sponsors for rallying together and helping to make this happen.”

As well as being able to tune into the livestream for free, ticket holders to the event will be receiving refunds in accordance with the event policy, and Nuku Ora worked with venue staff and the catering company to donate the leftover food from the event to local charities.

This year’s awards were already a special edition, due to last year’s event also being cancelled due to COVID-19. Usually an annual event, this year finalists represented achievements from April 2019 – April 2021.

Young footballer Ben Waine also had a stand-out night with the Phoenix player taking home both the Wellington Sports Med Emerging Sportsman and the Stuff Personality of the Year awards. At just 20 years of age, Waine is the youngest Nix player to score five goals or more in a season and only the fourth to score a goal in four straight matches.

Josh Junior took home the Kāpura Sportsman of the Year Award after being the first New Zealander to win the Finn Gold Cup (the Finn World Championship) back in December 2019 in Melbourne and playing a key role in capturing the 2021 America’s Cup.

A new category this year, the Wellington City Council Community Initiative award went to The Shift Foundation for their Just Shift It and Te Tauoranga programme which helps improve young women’s wellbeing and levels of physical activity.

“The awards have always been about not only acknowledging our finalists and their successes, but also about the challenges they have overcome, and the friends, family, coaches, administrators, and volunteers who have helped them along the way,” Gibbons said. “We wanted to broaden this scope even more by also celebrating the important contributions from individuals and organisations in getting people active through recreation across the region.

“As Wellington’s Regional Sport Trust, it was important to us to deliver a more inclusive and community-focused event, that also continues to celebrate the incredible sporting success of this region.”

Administrators, officials and volunteers were celebrated throughout the night with Dean Eager taking home the Fortune Favours Volunteer of the Year award for his support and involvement with Football over the last 50 years, and George Turirua Lajpold received the LANtech Lifetime Contribution Award for over 50 years of service to Rugby League as a player, coach, and administrator.

Founder of WAA HINE SKATE and Māori Girls Skate Co., Bailey Te Maipi was honoured with the Trish McKelvey Leadership Award for her dedication to skateboarding, creating a safe and inclusive space, and her advocacy for the future of the sport to council Long Term Plans.

Four sporting icons were also recognised on the night, with rugby star Tana Umaga, paralympian Duane Kale, golfer Lynnette Brooky, and weightlifter Olivia Baker being inducted as Gibson Sheat Lawyer’s Sports Legends of Wellington. The Legends each received plaques in their honour at the ASB Sports Centre in Kilbirnie, joining the 56 previous inductees.

A panel of independent judges deliberated over 170 nominations across 14 categories to arrive at the winners. A full list of winners, as well as a recording of the livestream can be found at www.wellingtonsportsawards.co.nz. 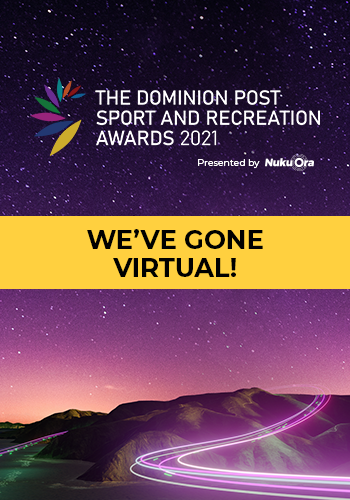